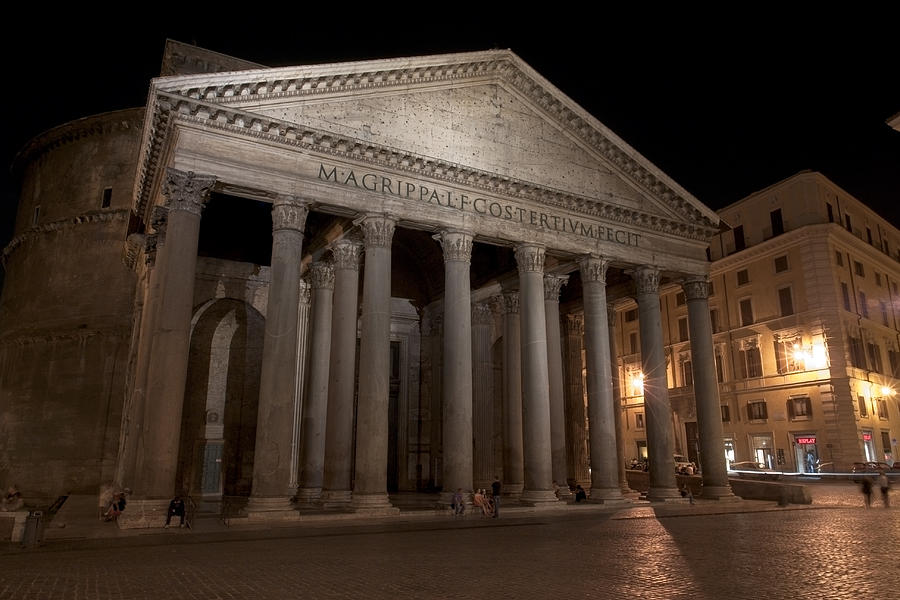 Rome, Italy. Night view of the Pantheon seen from North, from Piazza della Rotonda. Originally built in year 27 b.C. by Marco Vipsanio Agrippa, son-in-law of emperor Octavian Augustus, restored by Domitian after the fire of 80 a.D. According to a theory, the original building was rectangular and facing South, and was totally reworked under emperor Adrian in 118 - 125 a.D. with the insertion of the round cell and the moving of the entrance to the North side, repeating the old writing on the new front. Recent excavations seem to suggest instead the Pantheon never changed its orientation. It underwent a number of vicissitudes during the following centuries: fortress, papal building, church (with bell-towers added and removed). The dome had a cover in gold-plated bronze which was removed by the Byzantine Emperor Constans II "the bearded" (the interior was sacked). It was then covered with lead by pope Gregory III in 735. In 1270 when it was used as a church a bell-tower was raised at the centre of the fronton. In 1625 pope Urban VIII Barberini famously removed the bronze cover of the wooden beams of the porch to make 80 guns for Castel Sant'Angelo and the four columns of Saint Peter's baldachin (canopy), and had Bernini build two small bell-towers instead of the central one (the so called "donkey ears") which were eliminated with the restoration of 1881 - 1883. Since 1870 it is the memorial chapel of the kings of Italy. The Romans call it "La rotonda" (the round one). The walls are 6.2 meters thick and the dome has a diameter of 43.3 meters, which equals the height from the floor to the top.